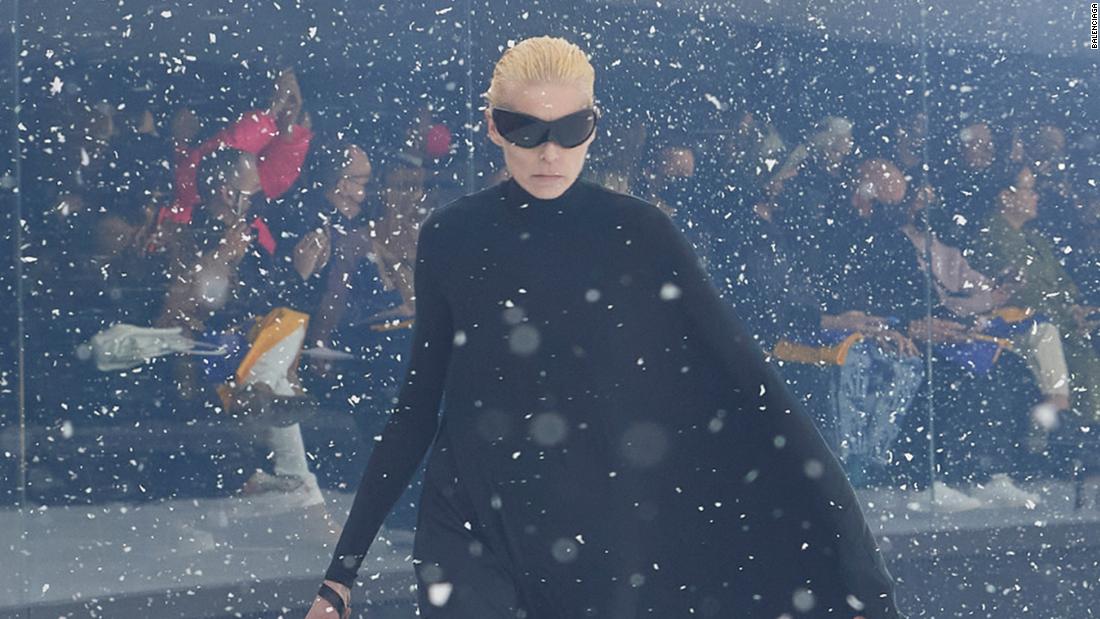 Balenciaga’s last show was a commentary on the climate crisis, virtual reality and the war in Ukraine

With all eyes on Balenciaga, one of Paris Fashion Week’s most anticipated collection unveilings, brand creative director Demna used his platform to pay tribute to Ukrainians in a dramatic show that evoked a deep feeling uneasy about the future.

For the designer, the humanitarian crisis unfolding in Eastern Europe, where more than 1.5 million Ukrainians have fled the country, is hitting home.

Demna (who prefers not to use his last name) was born in Sukhumi, a city in Georgia that saw heavy fighting during the country’s civil war in the early 1990s. The designer and his family were among tens of thousands of people who fled Sukhumi amid conflict in the disputed region of Abkhazia, considered independent by Russia despite being internationally recognized as part of Georgia.

“The war in Ukraine triggered the pain of a past trauma that I have carried with me since 1993, when the same thing happened in my home country and I became a refugee forever,” he said. written in a note given to the label’s guests. Fall-Winter 2022 show, held on Sunday on the outskirts of Paris.

In a poignant moment, the designer recited a poem in Ukrainian by beloved poet Oleksandr Oles. No translation was provided as Demna wanted his overarching message of strength to be heard by those who could understand him. In another gesture, Ukrainian flags were draped over the seats of the guests.

During the show, the models trudged through artificial snow and biting wind, some holding oversized leather trash bags (or trash pouches, as the show notes described them).

Although the collection was conceived before the war in Ukraine broke out, it was hard not to draw parallels and, speaking to reporters behind the scenes, Demna said the set and staging – a shocking and moving production – deliberately reflected his own experience of conflict and displacement 30 years ago.

Demna also noted that the gravity of the set was, originally, a partial commentary on climate change and how, due to global warming, snow may need to be digitally rendered in the future. A glass wall separated the audience from the circular set, creating a sort of IRL live stream.

The show was not the first time Demna responded to the war in Ukraine. Last week, Balenciaga posted an image of the Ukrainian flag on its Instagram account and said all of the company’s channels would share details on how to contribute to humanitarian causes. The post also announced that the label would provide resource instructions for verified information.

Balenciaga has since deleted this image from its grid and uploaded footage from the show. A link to donate to the World Food Program remains in Balenciaga’s Instagram highlights section.

The collection featured long trains and puffy silhouettes alongside classic staples like oversized turtlenecks and hoodies. Iconic skintight jumpsuits were also on display. One model was wrapped head to toe in yellow and black Balenciaga packing tape – an identical look to the one seen on Kim Kardashian who attended the event as a guest.

The look is also worn by Kim Kardashian in the public. Credit: Balenciaga

The show ended without a finale, where the models usually parade together to take a final group walk. Instead, the latest model departed on an intense and suffocating track called “Storm”, by electronic music composer BFRND. Lights in the fake sky above the set flickered and twinkled, adding drama to the man-made weather.

In his note to guests, Demna said he considered canceling the show altogether in the week leading up to it, reflecting on the fact that, “in times like these, fashion loses its relevance and its real right to exist”.

“Fashion week feels like some kind of nonsense,” he wrote.

But he came to the conclusion that canceling the event would mean “giving in” and “surrendering to the evil that has already hurt me so much…I decided that I could no longer sacrifice parts of myself to this war. senseless and heartless. of the ego.”

In the end, the show achieved what the creator does best: it forced the viewer to ask questions, both about themselves and the system – perhaps making a barbed suggestion that Balenciaga of Demna reflects the world, and often what we see looking at ourselves is going to be uncomfortable.

The third round of talks between Ukraine and Russia has started, according to Russian media