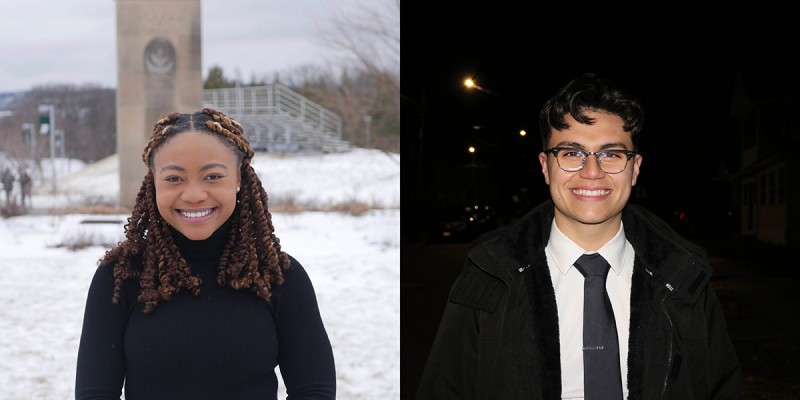 Rocabado, who will be a senior in the fall, is from Queens. Majoring in philosophy, politics and law, he was inspired to come to Binghamton after his sister, Gabriela Avila ’16, MPA ’17, an EOP alumnus who now works for the United States government, found success after his time at Binghamton University.

“She was really a big inspiration to me,” Rocabado said. “She also taught me a lot of resources available in Binghamton. She was the one who told me about the BEP [Binghamton Enrichment Program], and it really opened my eyes to the resources here. She always told me that in Binghamton you’ll notice there’s space for multicultural students, but you’ll always feel like it’s different from home. We come from an environment where everything is POC [people of color] so it feels different. She worked for the Fleishman Center for Career and Professional Development, and she really tried to provide resources for POC students. So that’s something I try to reflect in my work. [in the SA].”

Johnson will also be a senior in the fall of 2022. Majoring in human development, she also participated in the BEP, a program that she says helped her get a head start at Binghamton, both academically and socially. .

“Moving-in day was one of my favorite memories just because I got to see all the friends I made over the summer,” she said. “So after moving in, we all hung out that first day, and I really felt like these are my friends – this is my community.”

Now, under the incoming SA administration, Johnson and Rocabado want to make changes that will help all students find equal opportunity and success.

One of Johnson’s goals as SA president is to reinstate a program that she says has helped her on the path to success: Students of Color and the Faculty of Color Luncheon.

“I went there when I was a freshman,” Johnson said. She was struck to see other students who looked like her in her field of study. “Imagine how students of color might feel coming to this campus knowing that there is [more students like them in their departments]. I think it would make them feel much more comfortable in a classroom.

Rocabado wants all students to feel at home in Binghamton, and one of the ways he wants to achieve this is to ensure SA is a safe space for students and student organizations.

“One thing I want to provide is to make sure they know their voice is heard and that SA is not here to be combative or we’re just here to fix mistakes,” Rocabado said. . “We are here to provide students with services from the day they start in Binghamton until the day they finish.”

Johnson also believes the role of AS is important in providing resources and opportunities for students.

“We were all elected on what we ran on, which was that we actually wanted to be the voices of the students to the administration,” Johnson said. “So having that understanding, when we actually take our positions, is the goal – to just continue to stand up for the students.”

Outside of SA, Johnson is also a resident assistant on campus. Once she graduates, she wants to become a public school teacher to give back to communities and neighborhoods like the one she grew up in.

“I plan to become a third-grade teacher,” Johnson said. “In New York, third-grade test scores are used to determine whether or not a student should pass later in their college career. I want to become a teacher to help bridge that gap, and then eventually move up in education policy.

For Rocabado, who wants to work in the growing field of social media, finding a place can be tough, but he has some motivational words for new Binghamton students who might struggle to find their footing, especially during the transition. to in-person life and learning.

“Don’t be afraid,” Rocabado said. “I know a lot of students struggle to find a place here, but I just want students, especially EOP students, to know they have a place here. They fought for this space, and they’re here for a reason.