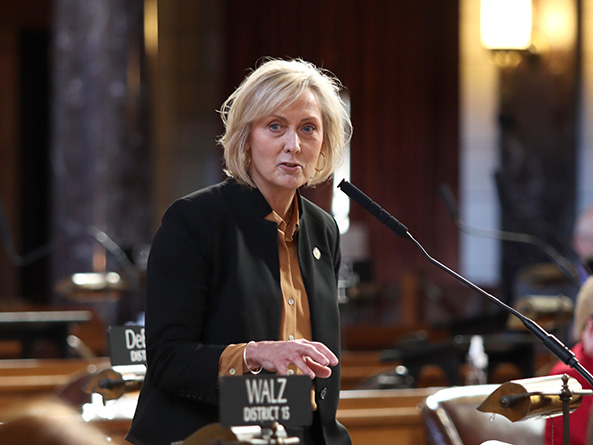 Below LB890, presented by Fremont Sen. Lynne Walz, each district would receive an Education Stabilization Basic Assistance (ESBA) disbursed from a new trust fund. The bill would also increase the state income tax allocation to school districts from the current 2.23% to 20% in 2023-24.

Additionally, LB890 would reduce the Local Effort Rate – a component of the school funding formula that uses property assessment to determine how much a district can contribute in property taxes to fund a school.

Walz said LB890 would reduce school property tax claims by about $728 million when fully implemented and ensure that many more schools receive equalization assistance, which is intended to cover the difference between school resources. a district and its needs.

LB891, a companion bill introduced by Sen. Brett Lindstrom of Omaha, would change the school levy authority and adjust the state’s tax code to fund the additional aid.

In addition to allocating a portion of state sales and use tax proceeds to the ESBA trust fund, Lindstrom’s proposal would end the distribution of refundable income tax credits under the the Nebraska Property Tax Incentives, created by LB1107 in 2020, and would reallocate that money to the school. funding.

The credit, currently funded at $548 million, is based on the amount an eligible taxpayer paid in property taxes to their school district in the previous year.

One waiting Education Committee amendment would replace the bill with an amended version. Along with other changes, Walz said, it would ensure that each school district receives at least 20% of its base funding from the state.

Walz said she would introduce an amendment to delete this provision.

Lindstrom supported LB890. Although this and LB891 would not provide the same amount of property tax relief as the LB1107 credit initially, he said, they would be a more sustainable way to deal with high property taxes and ensuring that state aid is distributed more equitably among all school districts.

Briese said he agrees that the state should allocate additional funds to public education, but that any such proposal should include a “reasonable cap” on increases in school property tax claims.

Senator Lou Ann Linehan of Elkhorn, Chair of the Revenue Committee, also opposed the bill. She said she’s “completely certain” that LB891 won’t go on the general record and questioned the impact of her proposed sales tax allocation on the state budget.

Additionally, Linehan said, the proposed repeal of net option funding in LB890 would discourage schools from accepting elective students. She further questioned why the core funding provision – which had been requested by small rural schools – should be removed from the committee’s amendment.

After several hours of debate over three days, President Mike Hilgers of Lincoln suspended LB890 at Walz’s request. Hilgers said the bill will not return to the agenda unless its supporters and main opponents reach an agreement.