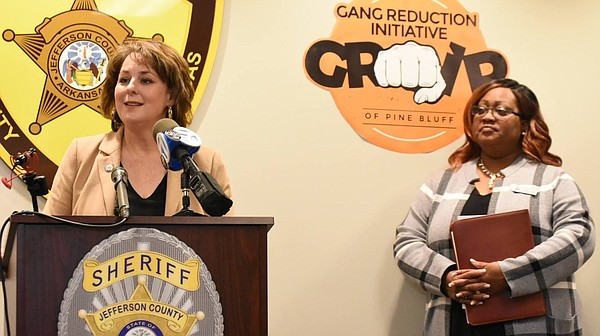 Arkansas Department of Education Assistant Commissioner Stacy Smith fiercely defended Barbara Warren’s work as superintendent of the Pine Bluff School District during a lengthy quarterly report on the local system at the meeting Thursday’s state board of education in Little Rock.

Smith, who works with Warren while the district remains under ADE oversight, spent most of her 54-minute presentation outlining Warren’s accomplishments and giving her the proverbial vote of confidence while defending her, along with other district leaders, against what she called misinformation regarding the potential progress of the Pine Bluff High School reconstruction project and other community criticism.

The presentation followed much shorter and more positive updates on the Lee County and Earle County school districts, which are also under state control.

“Last year she presented a plan that minimized transition for students, prioritized teacher safety, even ensured digital curriculum was purchased in all subjects for all grades and that the district went 1-1 with technology, [in] two districts,” Smith said of Warren.

Warren was also superintendent of the Dollarway School District until its July 1 annexation to the PBSD.

“She had regular weekly Zoom meetings with the community before the new school year about what was going on and what the changes were. They had on-site computer pick-up and on-site support if you had any issues with your computer. They put Wi-Fi in the community. There’s a lot going on,” Smith added, among other accomplishments. “… She showed improvements in both tax audits for both schools [districts]. … We have confidence in Mrs. Warren.”

Smith said teachers who say they don’t have resources for their classrooms should report to their homeroom teacher, building specialists, principals or other supervisors to get them. Smith also described what Warren purchased for the district, including literacy programs aligned with the science of reading and digital resources such as Lexia Core (K-5) and Lexia Power Up (from Grades 6-12), ALEKS (Grades 6-12 Mathematics). ) and Edgenuit.

“If they didn’t have it, they didn’t go looking for it,” Smith said. “We identified some who had these resources in their class, but they didn’t open them.”

But the reported lack of resources is an isolated incident, Smith noted.

“We have hard-working teachers in the Pine Bluff School District every day, and you don’t hear from them,” she said. “Is it difficult? Yes. Is it troubling? Yes. If the district had done everything right, we wouldn’t be here.”

The PBSD has been under state control since 2018. A Smith chart showed the state board indicating the Department of Education took over the PBSD in November of that year, while an article by the The Arkansas Democrat-Gazette reported that the move took place two months earlier.

Go Forward CEO Ryan Watley and the Parent-Teacher Organization (PTO) of Pine Bluff High School have written open letters to Warren and the state Department of Education in recent days, pleading with them to rebuild the high school at its current location on West 11th Avenue. Smith reiterated Thursday that the Department of Education has not made a final decision on the planned $22,988,538 project (of which the state will provide $12,817,259 and the district will have to cover the rest), pointing to another contrary rumor.

A limited authority board, the next step toward the state restoring full local control in the Pine Bluff School District, could be appointed by August or September of this year, Smith told the state board. The local council will be asked to “take the lead” in steering the school project, she added.

“I was very moved today by the vocal support I received from Ms. Smith,” Warren said. “I didn’t ask her to say that, but I’m glad she did because I’m going to be honest with you, it was tough. Yes, I directed, but it was hard work. ‘team.”

Says Smith: “I’m not going to say it’s smooth, but we have faith in Barbara Warren.”

Giving the latest data on student infractions at PBHS, Smith said there were 142 cases of class cutting, 141 cases of fights (including two “significant” altercations involving gangs and resulting in multiple arrests) and 229 case of disorderly conduct.

“It’s constant intervention and prevention of what you can do to defuse trying to keep everything quiet on campus, all on a very open campus,” Smith said.

Smith’s voice grew more impassioned as she addressed a shooting that occurred just south of PBHS on Monday, forcing the campus into lockdown for 42 minutes. Police said the shots came from the parking lot on or near the south side of the school, adding that no one was injured.

“Every student at this school can tell you that someone died from gun violence in this community, and every student at this school can tell you who’s in jail,” Smith said. “We have unauthorized adults on campus. Students walked out two weeks ago, and I just want to say the students have been very well behaved. I want to thank Ms. Warren for not escalating the situation. The The police was called. The police was there. They said, “No, no, no, we’re not making this up. It’s a matter of law enforcement.”

Smith pointed out that the district has four security officers assigned to the high school, with two additional officers hired in December and January.

“We have contracts with off-duty police officers to be on site based on their availability,” Smith said. “This is all funded by the district. At this point, I show the district has spent close to half a million dollars on security alone, which they have spent.”

“Sometimes the truth is hard to hear,” Newton said. “It won’t happen overnight, but we’re headed in the right direction and we’ll get there. It’s all about those babies.”

‘I just didn’t have the money’: FL residents struggle to afford rising rents for housing