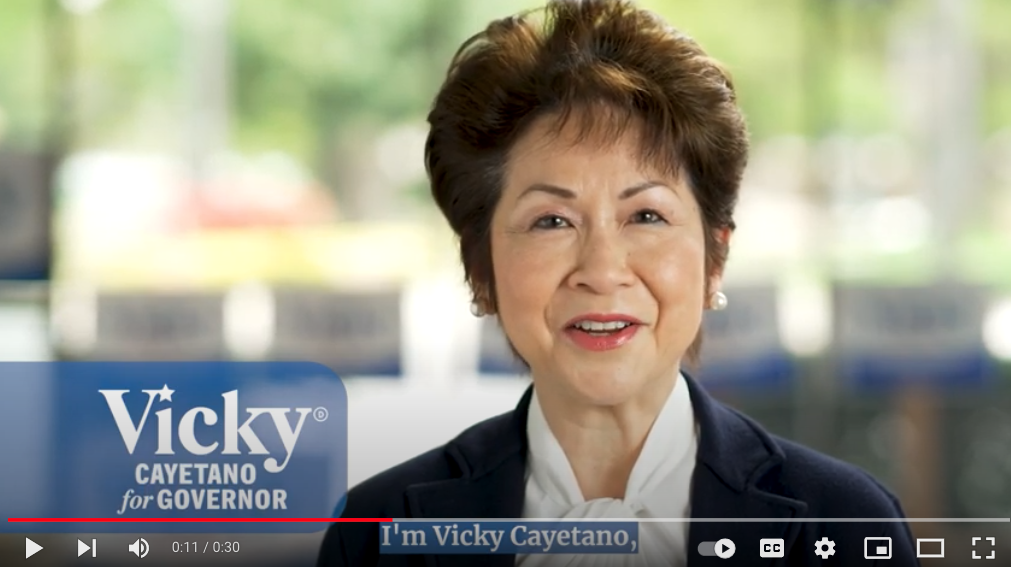 Vicky Cayetano has come out with her second 30-second political commercial for broadcast television.

“We hear about the same issues over and over again,” Cayetano says in the ad, “affordable housing, homelessness and the high cost of living. But we see no progress.

The spot shows images of people sleeping on the streets and in parks, and tent cities as part of Honolulu’s downtown landscape and along the coastline.

Cayetano, a Democratic gubernatorial candidate, began airing the ad this week on KGMB, KHNL, KHON and KITV. It’s related to his campaign coming out last month of “A family-oriented economic plan.”

Thirty seconds isn’t a lot of time to discuss a seven-page plan. But the TV clip suggests that Cayetano’s business experience running a laundry service will stand her in good stead as the state’s chief executive.

He also points out that Cayetano wants to suspend the general state excise tax for families, a sizable proposal released on March 12 but which has received little attention.

This could prove to be a compelling selling point for his campaign. Cayetano, a former first lady, is asking for a one-year suspension of the 4.5% GET on food, medicine and diapers for families earning less than $100,000 a year.

As the plan itself explains, “Tax credits or exemptions for specific groups or businesses are regularly enacted by the state for businesses such as film production, renewable energy projects, photovoltaic panels, coastal mitigation efforts. However, this would be the first tax holiday of its kind to benefit the average consumer.”

The TV ad ends with a listing for Cayetano’s website. Whether viewers bother to click on it is another matter, but it’s to Cayetano’s credit that she released a plan — something that often comes from gubernatorial candidates but usually later in the campaign when the voters (and journalists) pay more attention to it. Hawaii’s primary is August 13.

Perhaps other highlights of the economic plan, though often sketchy, could be used in future Cayetano TV commercials – for example, declaring a “state of emergency” to prioritize homelands. Hawaiians or support a visitor use fee to better care for the environment and natural resources.

Cayetano’s “Economic Plan” runs through Sunday on local news, “Family Feud,” “Shark Tank” and other programs at a cost of around $20,000.

Read all about it

Cayetano’s main competitors — Lt. Gov. Josh Green and former Honolulu Mayor Kirk Caldwell, so far — have yet to take to the television airwaves. But Caldwell has four new advertisements printed in island dailies.

They include two that were published in the second half of March in the Honolulu Star-Advertiser, one focused on transportation, the other on the housing crisis.

One of these ads initially seemed out of place to me, although I don’t blame the Caldwell campaign.

The ad begins in large print: “Where should rail travel stop? The answer is very clear. The answer is “the train must go to Ala Moana”.

The timing seemed poor, as the ad ran in the same March 16 issue in which Mayor Rick Blangiardi is prominently featured on the front page saying the rail should now “stop” at Kakaako – it i.e. two stations and 1.25 miles less than the original plan. .

Blangiardi’s idea, which is based on the cold reality that there is currently not enough money to get the train to Ala Moana, is far from a done deal.

But could that somehow benefit Caldwell, who more than any other Island politician except Mufi Hannemann is rail-bound?

“This is indeed a state affair since rail funding is largely in the hands of the legislature and there are state appointees on the HART board” , explains the ad. “Any candidate who tries to pretend otherwise is dodging the issue.”

I give Caldwell credit for tackling the head of his perceived greatest political albatross.

The other print ad, this one published in Wednesday’s Star-Advertiser, states: “I would declare a state of emergency to deal with the homeless crisis in Hawaii.

(Note: I sense an emerging “state of emergency” theme in the 2022 campaign.)

Caldwell was due to run another ad in the Sunday Star-Advertiser, this one headlined: “We won’t meet our 2045 energy targets unless we do more now.

Caldwell also airs advertisements on neighboring islands with somewhat different but related topics. The Maui News, for example, has a Caldwell ad that talks about repairing or replacing aging bridges on the Hana Highway and improving the Kihei Interchange to ease rush hour congestion.

As noted in a previous Ad Watch, newspaper readership has long been declining, as has commercial TV viewing. People get their entertainment and news through other means including through social media.

But what the print ads show is that Caldwell is a candidate who is betting voters want to hear — or read or see — details about what they might do if elected governor. The same goes for Cayetano’s GET exemption.

Sign up for our FREE morning newsletter and face more informed every day.

No warning from government that personal data was breached: Sask. Alcohol and gaming providers