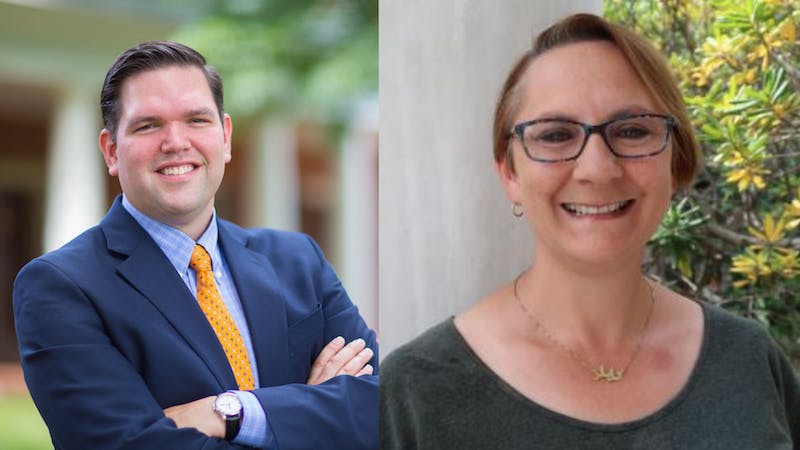 Each year, the Z Society – one of the University’s secret societies – presents the Distinguished Faculty Award to a University faculty member who serves as an outstanding leader and role model for those around them. Due to the COVID-19 pandemic, the Z Society has publicly announced its 2021 Laureate, Professor of Architecture Tyler Jo Smith, along with 2022 Laureate Dan Player, Assistant Professor of Public Policy at the Frank Batten School of Leadership and Public Policy.

In an emailed statement to Cavalier Daily, the Z Society provided a variety of glowing testimonials from students and faculty members who know both Player and Smith.

From Player, one student noticed the professor’s commitment to extending his relationship with students beyond the classroom by supporting those he teaches in their personal commitments.

“I heard from several acquaintances in my cohort that Professor Player made them feel heard, which is just one example of the inspiration he instills,” the student wrote. “He always seeks to uplift his students by participating in student-organized events, cheering us on at sporting events, or recognizing and sharing our successes.”

A colleague spoke of Player’s universal admiration among Batten teachers, highlighting his unique interests while talking about the respect Player holds for those he teaches and works with.

“While people might cite his soup dinners or playing the banjo as some of their favorite things about Dan, what I admire most is his dedication to his students and his family,” wrote the contributor. “He is driven by a strong sense of integrity that is an example to all of us.”

Player said in an emailed statement to the Cavalier Daily that he was honored to receive the Distinguished Faculty Award, an accolade made all the more significant because of the high caliber of faculty at the University who deserve to be recognized. recognized. Player paid tribute to those he teaches for thoughtfully engaging with his material, and said he cherished the shared experiences with members of the academic community that this award represents.

“The award included many kind comments from former students, and it was especially meaningful to me to hear some reflect on the life lessons they learned from one of our classes,” Player said. “This type of learning only happens if students are willing to immerse themselves in the learning experience. So I recognize that a lot of the credit goes to the great people I had the pleasure of teaching. I just hope they also know what a lasting impression so many of them left on me.

Smith was the 2021 recipient of the Distinguished Faculty Award. Due to the COVID-19 pandemic, however, Smith was not publicly recognized until the 2022 winner was released.

Smith, who impacts both the graduate and undergraduate students she teaches, said in an email to Cavalier Daily that she was “humbled and surprised” to know she had been chosen. Like Player, Smith attributed her success to her students, emphasizing how privileged she feels to teach.

“By working closely with majors in archaeology, art history, classics and many other fields, I have had the opportunity to know my students well and appreciate them for the wonderful and talented people they are,” Smith said. “Without all of them, I know this honor would never have been possible!”

A testimonial contributor called Smith “unprecedented” in his commitment to student success, a fact demonstrated by Smith’s regular and full enrollment in classes. The writer said Smith makes traditionally dense subject matter appealing to everything she teaches, drawing particular attention to how Smith begins her lecture on vase painting.

“Not every professor at the University begins a lecture on vase painting with a clip of a modern Greek pop song,” the testimony read. “As Director of the Archeology major, Professor Smith has fought tirelessly to advance the opportunities that students of the major can receive, whether it is finding the right excavation for a student (that whether here in the United States or abroad), to find funding for him to go to the dig, to find them internships in archeology.”

A testimonial contributor described himself as one of those students whom Smith impacted with his tireless support.

“I am one of many students who have been able to pursue their dreams because of Dr. Smith’s hospitality and commitment to our success,” the student wrote. “She takes a personal interest in her students as well as her fellow faculty, forming genuine relationships that last longer than graduation and retirement.”